It was a usual early morning, My younger son, Shiva, woke me up and insisted to go on hiking the hill near our village. I also got ready immediately. We got ready and headed to scale the mountain.

Sunrise, We saw the other day

Awakens the enthusiasm of the Child

It was dark outside; however, the Sun had already sent its beautiful saffron lights along the eastern horizon. We hadn’t come out of the village yet, and Shiva pointed towards a few stars overhead and exclaimed that the stars were falling. I knew the stars were stationary, but it was a big challenge to make him understand the concept. I still tried. According to my opinion he is too small to grasp the vastness of the universe.

We climbed the hill. All tired and sweating. Bit relaxed and in no hurry, we spent some more time up on the hill. The Sun already had marked its presence in the eastern sky. While descending down, Shiva again pointed towards the Sun, and asked, “ Baba, Is the Sun biggest of all? And there is sunlight beyond the Sun?”

I had shown my kids the Sun and the moon occasionally. Sometimes some stars also. However, when he proactively started speaking about the celestial bodies, I felt really good. Now was the time to answer his questions. I knew, he would remember very few things or even he may forget all. But still I told him few things about our solar system and the Milky Way. I could sense that his curiosity was satisfactorily addressed. He looked happier upon knowing something big. Something about, up high in the sky. And there I learnt another lesson from him. The lesson is very clear and bold. When you aim high in life, set your eyes on something really great, you become happy. And it’s not only about study of astronomy or making career in space science. Once you started getting amazed by such wonders of nature, you hardly care for worldly, material successes or failures. It’s a Sanskar, which would help us make ourselves calm, look up and stay amazed. Material life’s have’s and don’t have’s, hardly make any difference.

The dive into celestial data

We came home. He proactively went on to study(He is in Anganwadee). He looked quite confident. When I was telling him about the celestial objects, I realized that whatever knowledge I had, was very limited.

A representative image of the Solar System with sizes (but not distances, to scale)

Then I researched and based on the facts found by modern science, I got amazed by, the way the universe is functioning.

I came across many startling facts. So why not try to understand what are these things and how these things can help us.

Video – It begins with the Sun. Life on Earth is dependent on the Sun. Explore the inner workings of our nearest Star

To begin your journey to star gazing, you first must understand some basics.

The amazing part hasn’t started yet. Though the nearest neighbor, we cannot see Proxima centauri, which is only 4.3 light years away.

There is another very bright star in Orion constellation. We Indians call this constellation as Mriga(मृग नक्षत्र).  The brightest star in Mriga nakshatra, is Rigel, which is the brightest star in this constellation. Now the fun starts. This Rigel star is 860 light years away from earth. Still we can see it, with our naked eyes. The second largest star, in Mriga Nakshatra, is at a distance of 2000 light years from earth. We can see this star also with our naked eyes. But we cannot see Proxima Centauri. Is not it surprising?

Some how, if we could get up there on the Rigel star, and try to locate our Sun, can we see our Sun from there? The answer is a big NO. its because our sun is not among the brighter or brightest stars and also its size also among the low volume stars.
Means there are many, at least 100 billion, stars in milky way and our Sun stands nowhere when looked at the sizes and magnitudes of other stars. Isn’t it amazing? 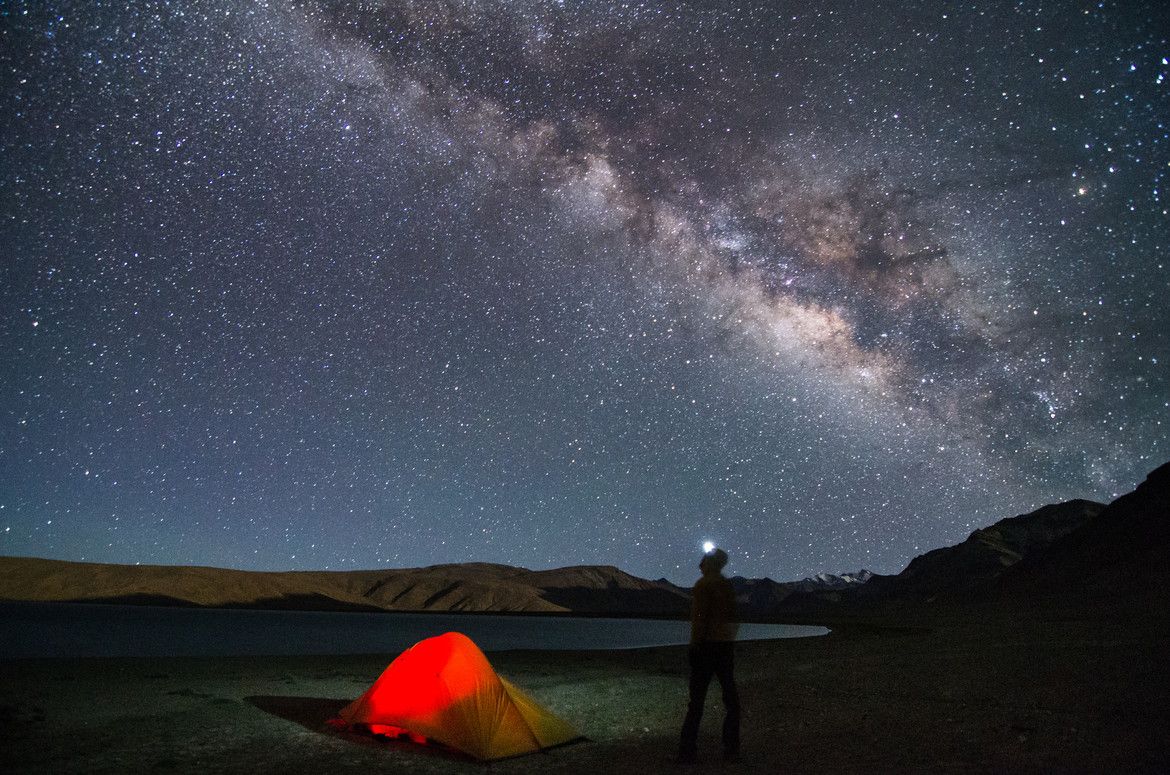 The Milky Way, we see from dark, quite away from city lights

It’s a common understanding that, all planets in our solar system revolve around the Sun. This means the sun is still. Right? That’s what our assumption is. However it’s not true. The Sun also is in motion and it revolves around the center of the Milky Way. Our Sun revolves at a speed of approximately 300 kms per second. Wow, Aren’t you amazed yet?

Apart from Our Sun, there are approximately 100 billion other stars in the Milky Way galaxy. Each star may have its own planetary system. Sometimes there are two stars in system, such two starred solar system is called as binary star or twin star.

The Milky Way, Its Galactic center and our Sun

Now comes another piece of information to get amazed. All these stars, rocks, clusters, clouds of gases orbit in particular pattern. Our Sun also revolves. All these objects are orbiting around the dense cluster of stars, which we can call as galactic center. This motion is spiral. There are many spiral arms. Each arm houses millions of stars. Hope you haven’t forgotten that our Sun is just another star of these millions of stars.

So until now, we have seen that, The Milky Way is something really big. The Milky Way houses whatever stars we see in the sky. So we can call it “our” Milky Way.

It’s not over yet. There is more to get amazed. Our Milky Way is a galaxy, as said earlier. Is our Milky Way, the only galaxy in the space?

There are more than 100 billion galaxies out there in the space. And some technological improvements indicate that telescopes can fix the count of galaxies to 200 billion. And hope u remember, The Milky Way(Our Milky Way), is just another galaxy in the space.